Diving in Gorontalo and Bolsel

Diving in Gorontalo and Bolsel

While Gorontalo already has a name among experts of Indonesian diving destinations - especially because of the whale sharks that can be seen here in the whale shark season from March / April - Bolsel is still a kind of terra incognita for most Sulawesi visitors.

Bolsel is the abbreviation for Bolaang Mongondow Selatan, an administrative district that adjoins Gorontalo to the east.

If you are already in town, it makes therefore sense to combine the two diving destinations Gorontalo and Bolsel to the east. Gorontalo can be easily reached via the Indonesian flight network or from Manado by public transport.

In addition to the long-established Miguel’s Diving diving center, the city also has freelance diving guides with whom you can organize a diving expeditions to the east towards Bolsel. You can find more detailed information at the end of this post.

Where to sleep in Gorontalo

Unfortunately, the tourist infrastructure in Gorontalo is more than poor. There is not a single really recommendable hotel in the city. I tested both the Amaris Hotel and the Grand Q Gorontalo in November 2019.

None of them are really suitable for a longer stay. The rooms in the Amaris are small, you can hardly put your luggage in them. The Grand Q has larger rooms, but especially in the older part of the hotel, these are rather run down. After all, the Grand Q has a roof terrace with a pool and a beautiful view.
The third hotel in this illustrious circle is the Maqna Hotel. Here, the room walls should be so thin that you can hear every noise from the neighboring rooms. All three hotels are halal. That means there are no alcoholic beverages available. 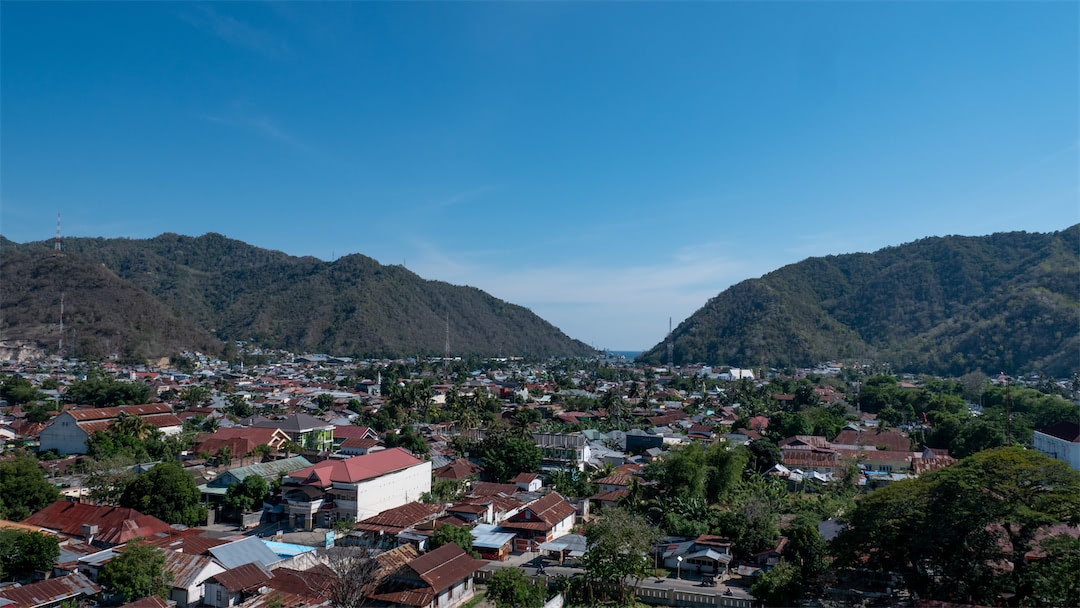 View on Gorontalo from the rooftop terrace of the Grand Q Hotel
Only in the Grand Q Hotel you could buy a bottle of beer in the bar for the equivalent of € 10.
Another annoyance in Gorontalo is the nocturnal noise from the many mosques in the city. Every morning around four o'clock, the noise of several powerful mosque loudspeakers wakes you up. Only one thing can help against this cacophony: If possible, spend the night on one of the upper floors and don't forget your ear plugs. 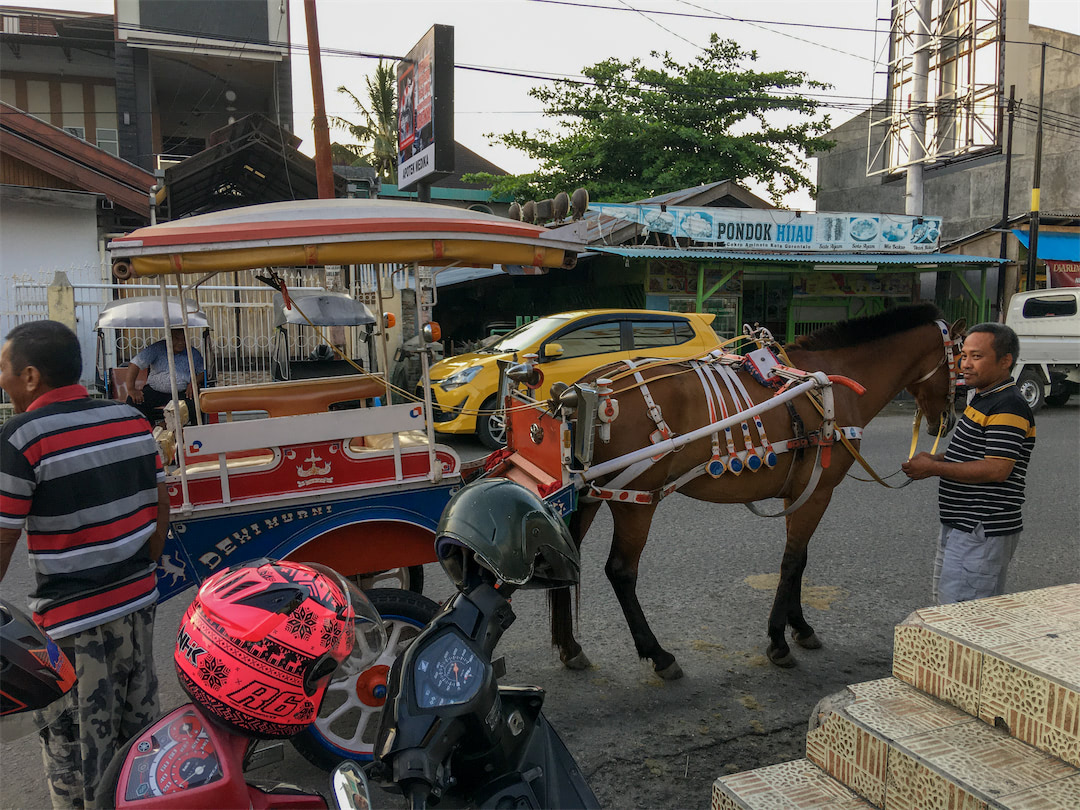 A horse cart waiting for guests in Gorontalo

Those who are not deterred by these unpleasant framework conditions will find the finest dive sites off Gorontalo's coast. The diving season starts in November and ends in June at the latest. After that, the south-east monsoon becomes too noticeable and causes precipitation and high waves on the coast.
Gorontalo is also an ideal diving destination in the European winter months and especially in January / February a good destination in Indonesia to escape the rainy season in the rest of the country.

There are many varied dive sites in the Gorontalo area. In the whale shark season between March / April and June / July you have a great chance to dive with the largest sharks at the Botubarani dive site. 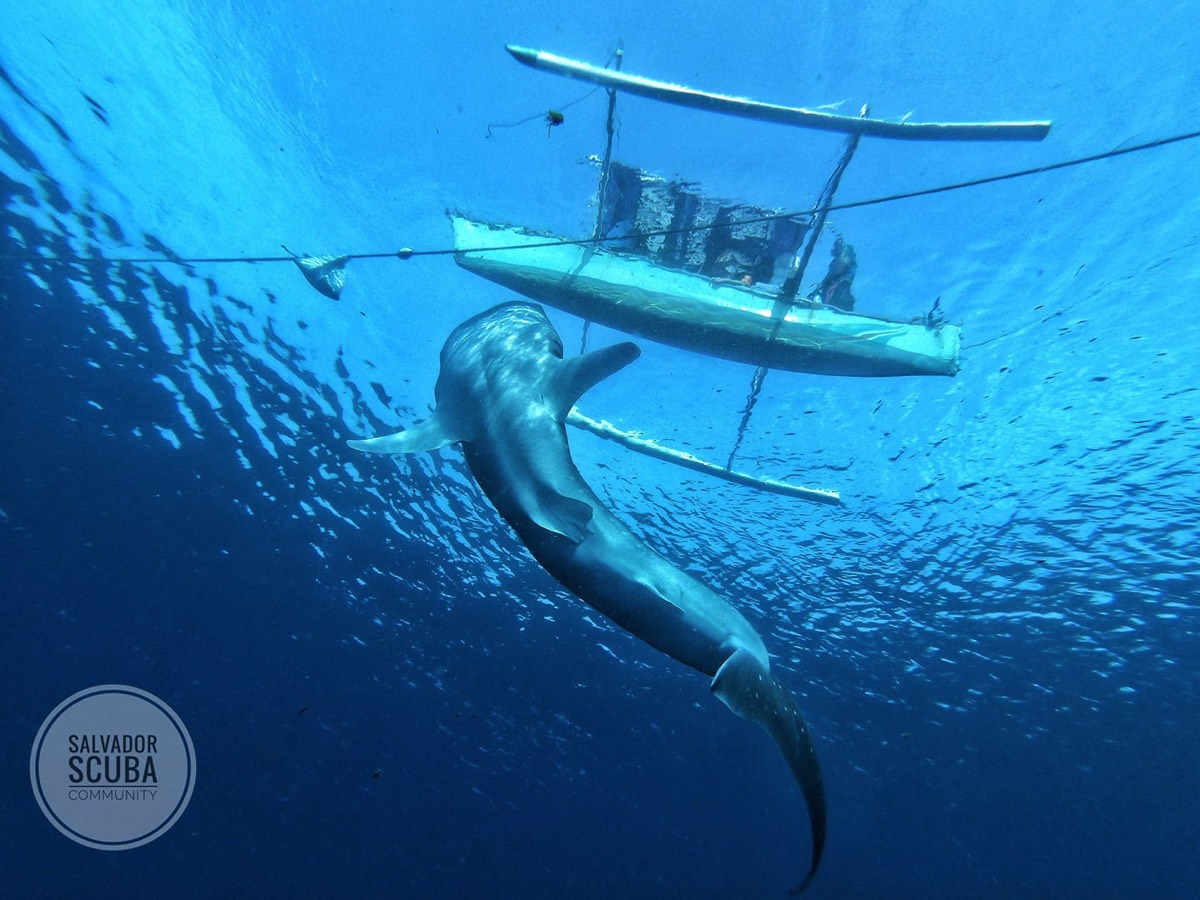 Whale Shark near Gorontalo
The Salvador Dali sponges, a new type of barrel sponges discovered only a few years ago, can be found in greater depths off the cliffs.
In front of the popular weekend destination Olele you can visit a bizarre underwater landscape and explore an underwater cave. There are several sites with large schools of jacks and again and again one encounters large dog-tooth and yellow-fin tuna on dives that pass by in the blue water.
The macro dive sites are also recommendable and do not need to fear comparison with Lembeh. In front of the village of Tambo’o, just a few kilometers east of Gorontalo, we found more hairy frogfish than anywhere else before. Here you can also find many rare octopus species (coconut, long-arm and mimik) and even the Ambon Scorpion fish is at home here.
There were many seahorses to be seen in the shallows. Mostly you have these dive sites in Gorontalo to yourself.

It gets even more interesting when you leave Gorontalo to the east. The road meanders along the coast and in every new bay that opens up, small fishing villages nestle against the mostly pebble beach. At first the steep slopes are bare and dry. Not much grows here anymore and maize is only grown in the rainy season.
After about an hour's drive, however, the landscape gradually changes. The mountains on the inland side of the road are heavily forested and you can see clove plantations on the slopes.
Then later the jungle predominates. A clear sign that we are approaching the Bogani Nani Wartabone National Park. The streams that flow into the sea from the north carry crystal clear water and invite you to take a refreshing swim.

In July 2019, the Bogani Homestay narrowly missed twice a catastrophe.

Two flash floods swelled the small stream that meanders through the valley into a raging river and tore away fish ponds and the swimming pool including a water wheel. Fortunately, most of the buildings have remained undamaged. Pictures and a short video clip of the first flood can be found here.

After the two floods and the pandemic the Bogani Homestay will now be converted into an Islamic boarding school.

If you want to travel to this area again after the COVID-19 pandemic, you must therefore look for other overnight accommodations.

My tip: first get in touch with Budi Satria (contact see below). He then also takes care of the accommodation in Bolsel.
During our stay in Bolsel in November 2019, we stayed at the Bogani Homestay, which is located in a quiet side valley next to the Sulawesi Highway in Bolsel.
Unfortunately, this accommodation is no longer available, so you have to switch to simple accommodations in the neighboring village of Molibago. There, for example, the Bolsel Diving Club offers rooms in a simple hotel. 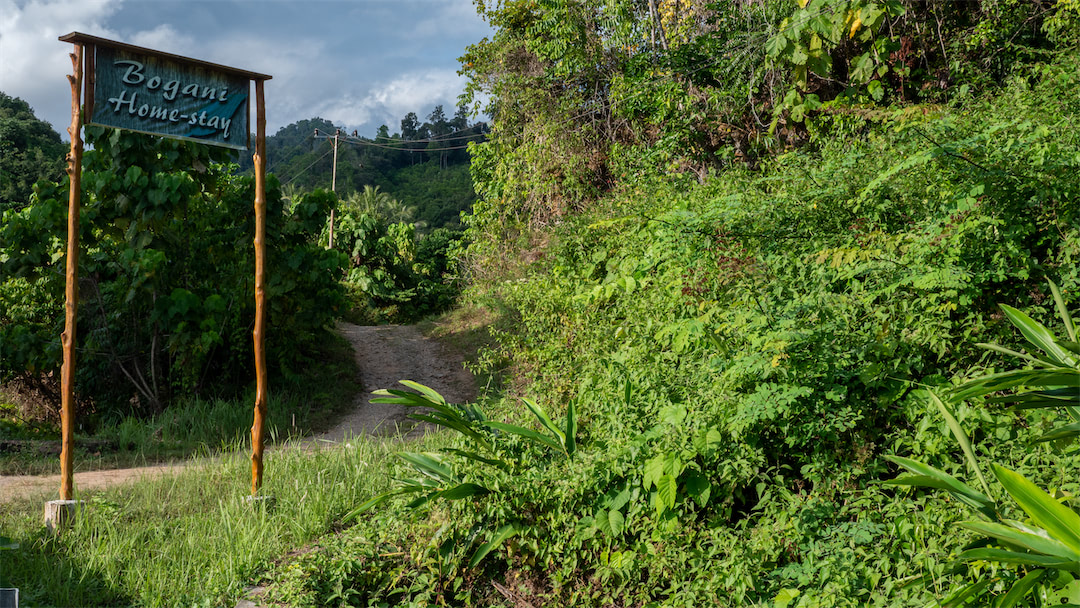 Branch to the Bogani Homestay

Bolsel also has a lot to offer in terms of leisure activities. Of course, the jungle in the mountains beckons. In the area around the Bogani Homestay, for example, there are several trails of different lengths and degrees of difficulty that are even marked.
If you are in the area anyway, you should take a few days to explore the jungle on the edge of the Bogani Wartabone National Park with a guide.

The short Trail of the Tarsius (see map below) can easily be done in under an hour; the slightly longer Black Macaque Trail takes about 2 hours. We didn't see the Tarsius, but we could see black macaques jumping in the trees.
Other, longer trails are also described on the homestay map. 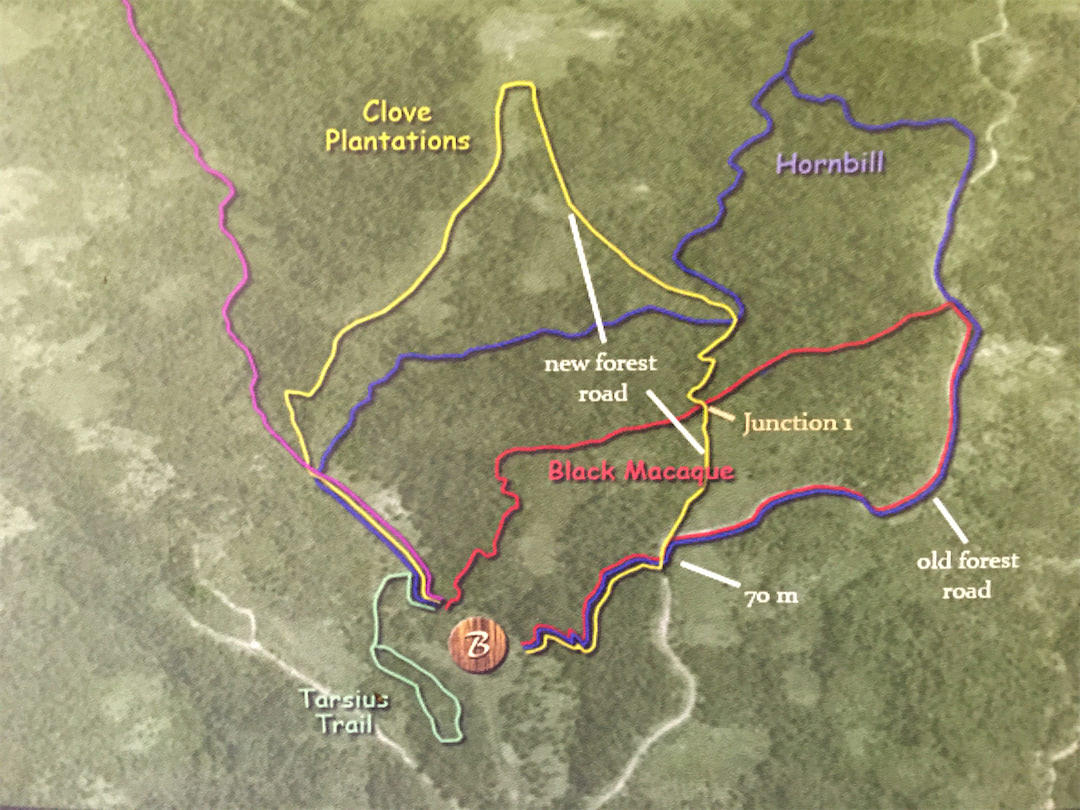 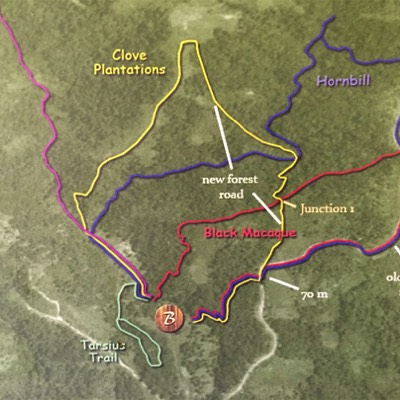 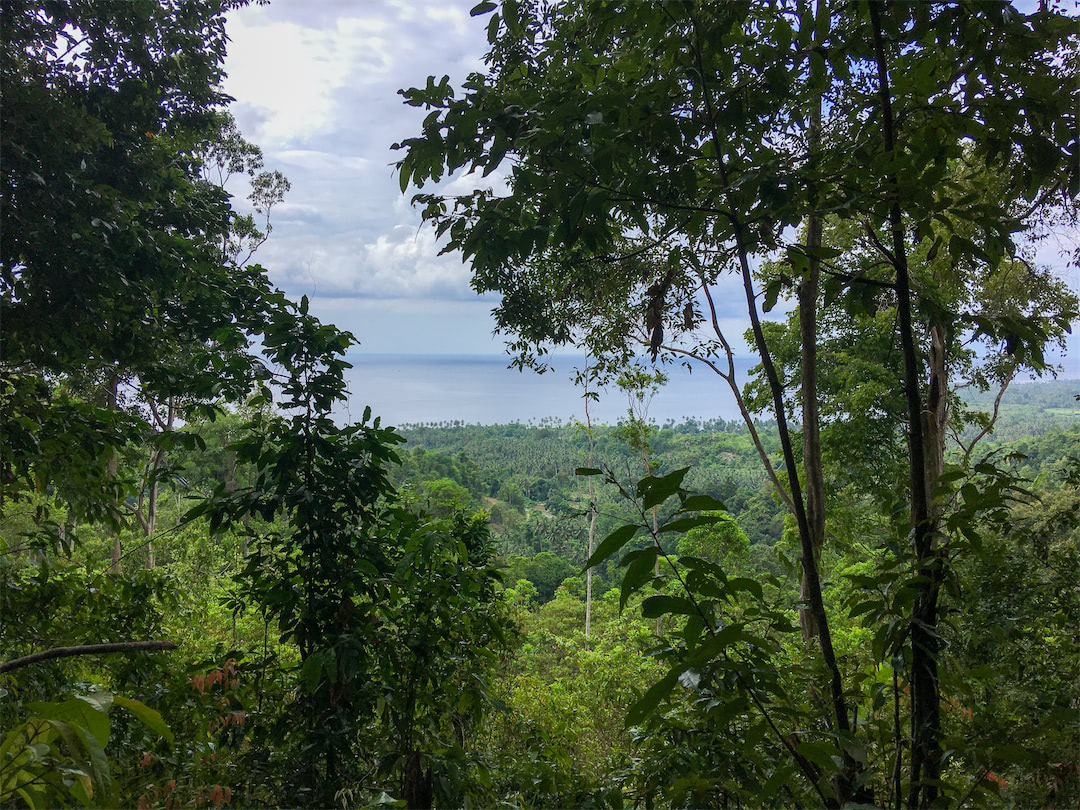 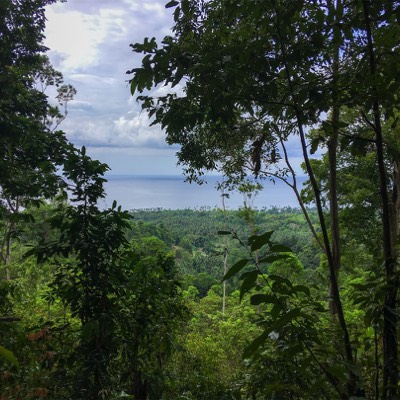 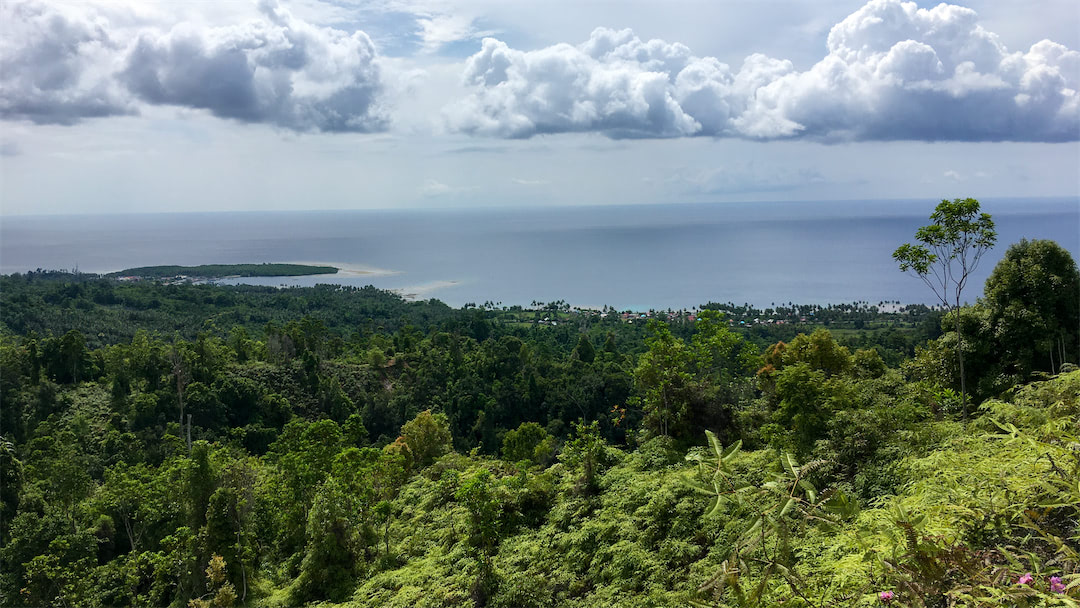 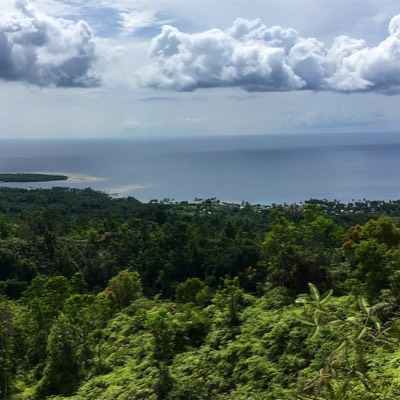 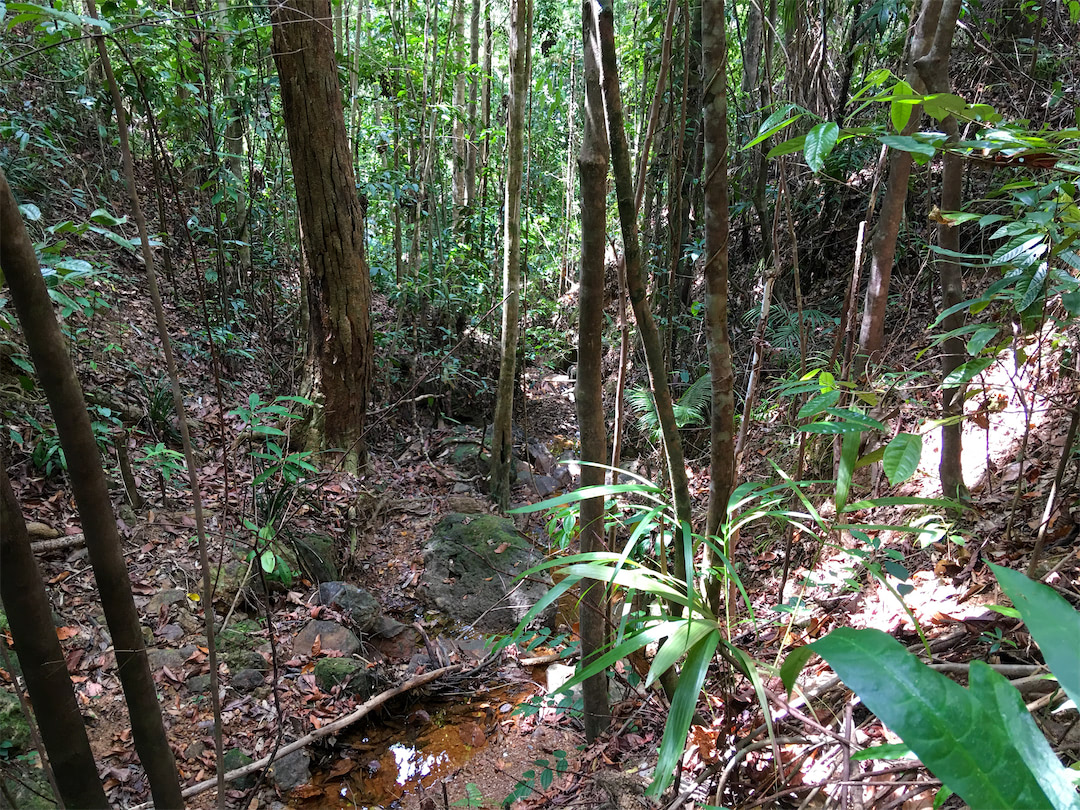 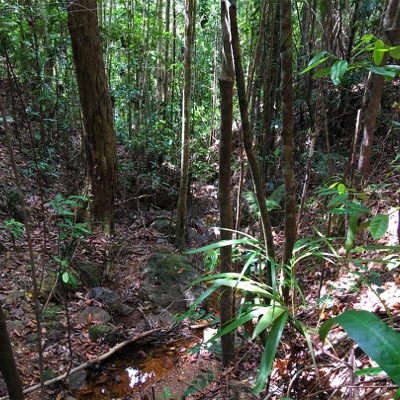 If you want to dive in Bolsel, you have to solve some logistical problems in advance. Although there is a local diving center in Molibago (more on this below), however reliable diving is not always possible there.
If you want to be sure that your diving really works, you should contact a reliable diving agent beforehand, who will then organize everything you need. This includes the transport of the diving boat, tanks and, if necessary, the compressor from Gorontalo to Bolsel, as well as the necessary team of drivers, captains and dive guides.
For two divers this is of course a considerable effort and relatively expensive. The best price-performance ratio would be achieved if you came with a group of six divers. Then the costs are distributed among more people. 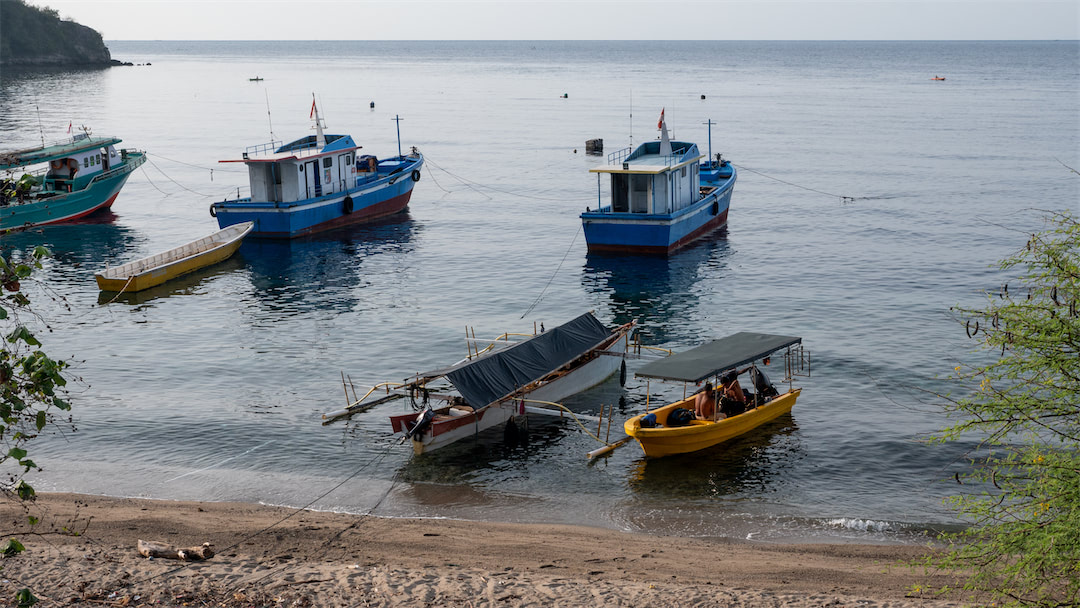 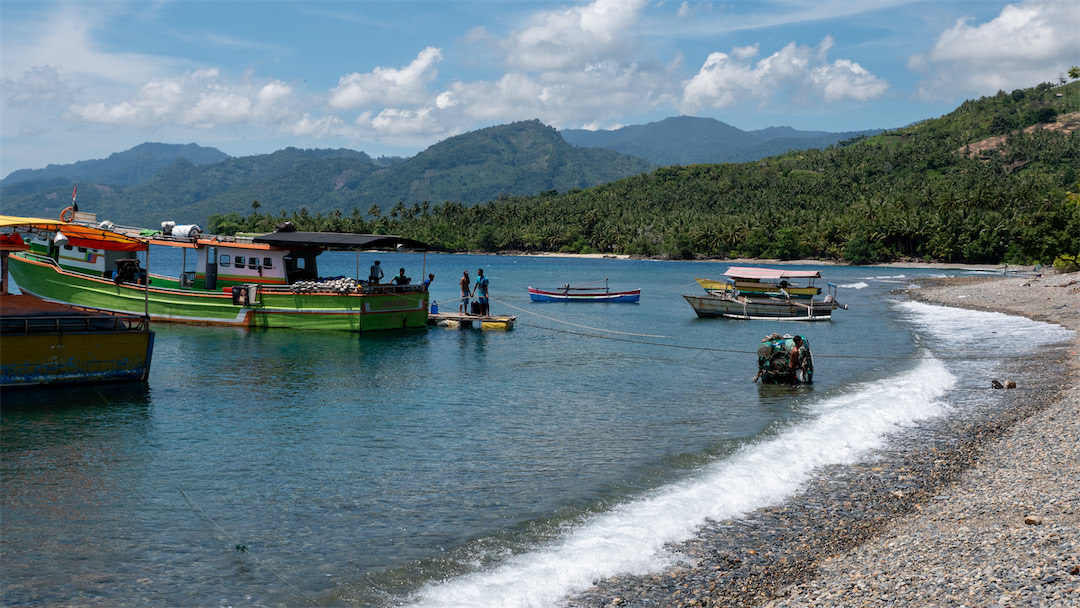 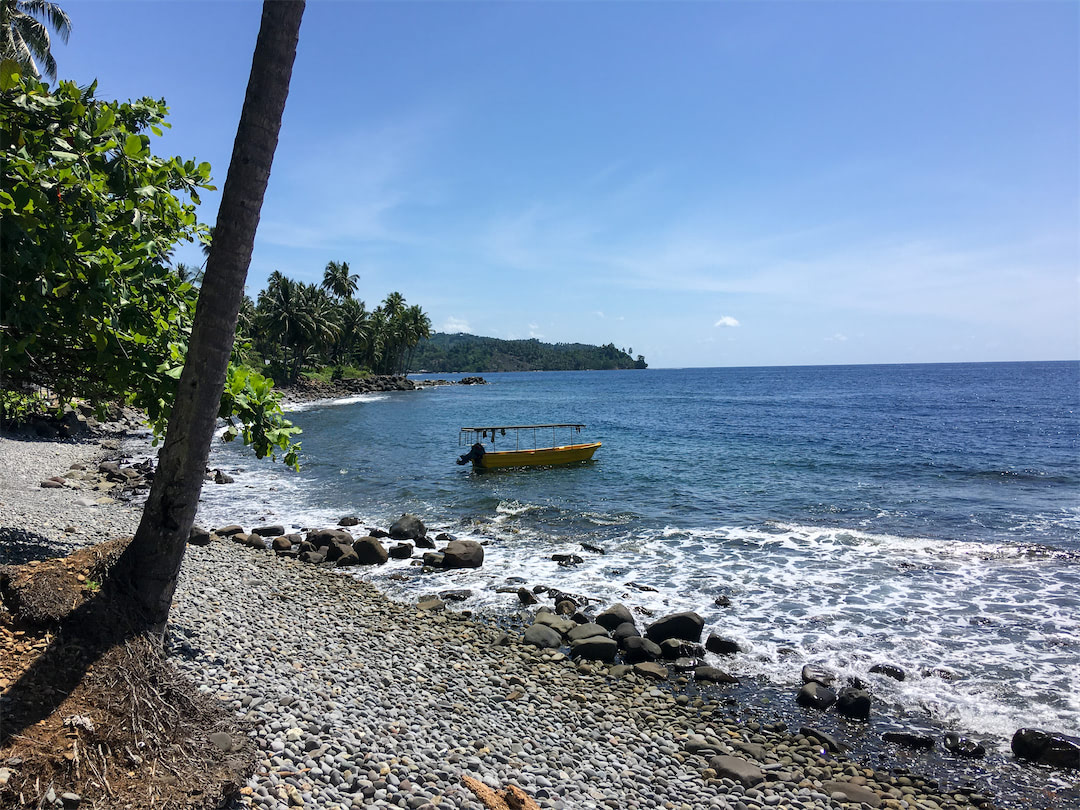 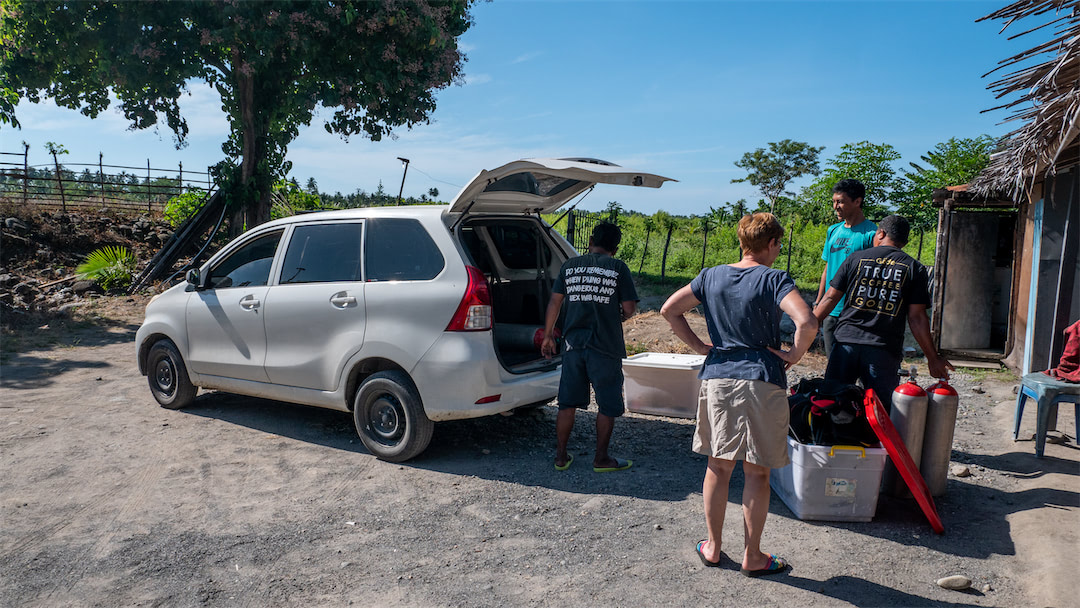 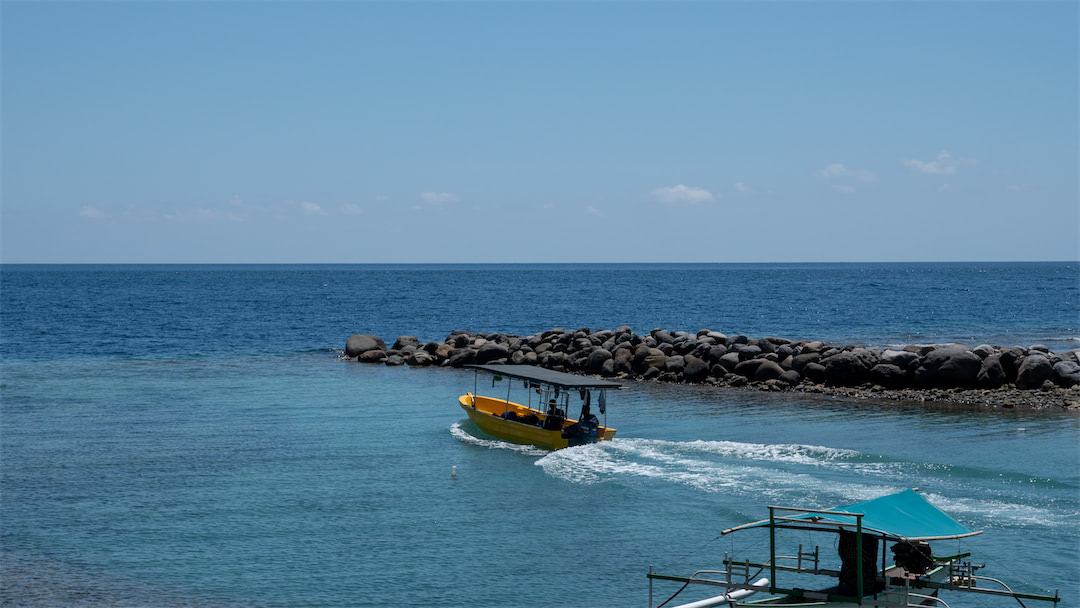 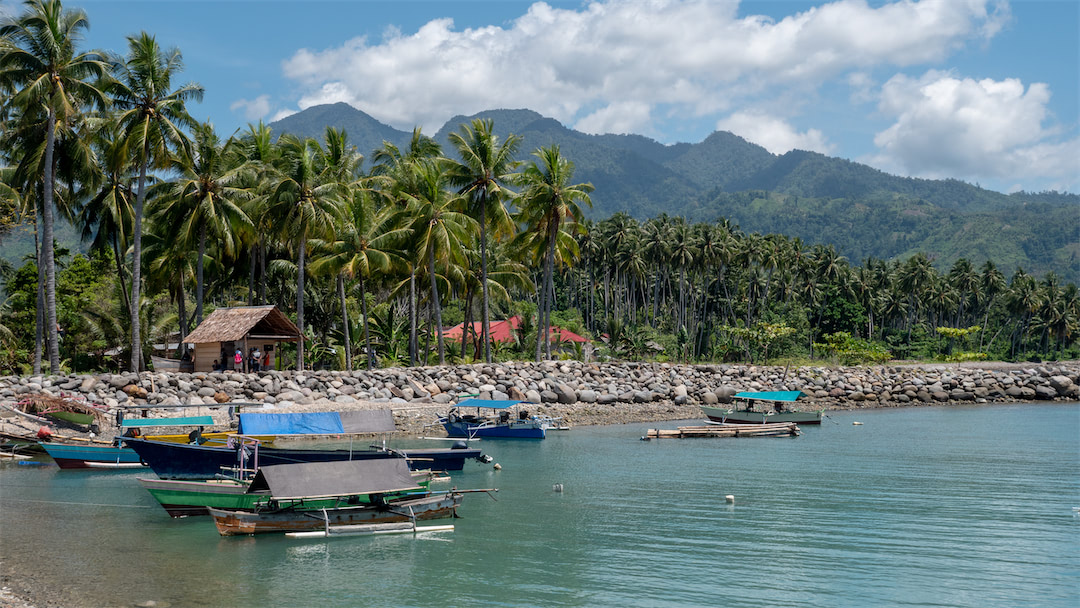 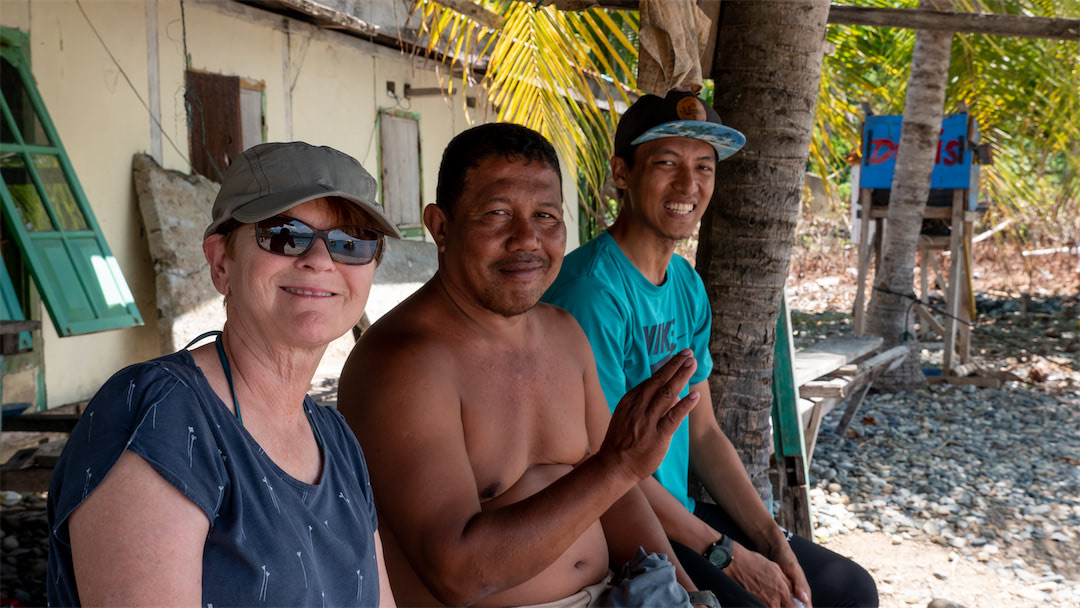 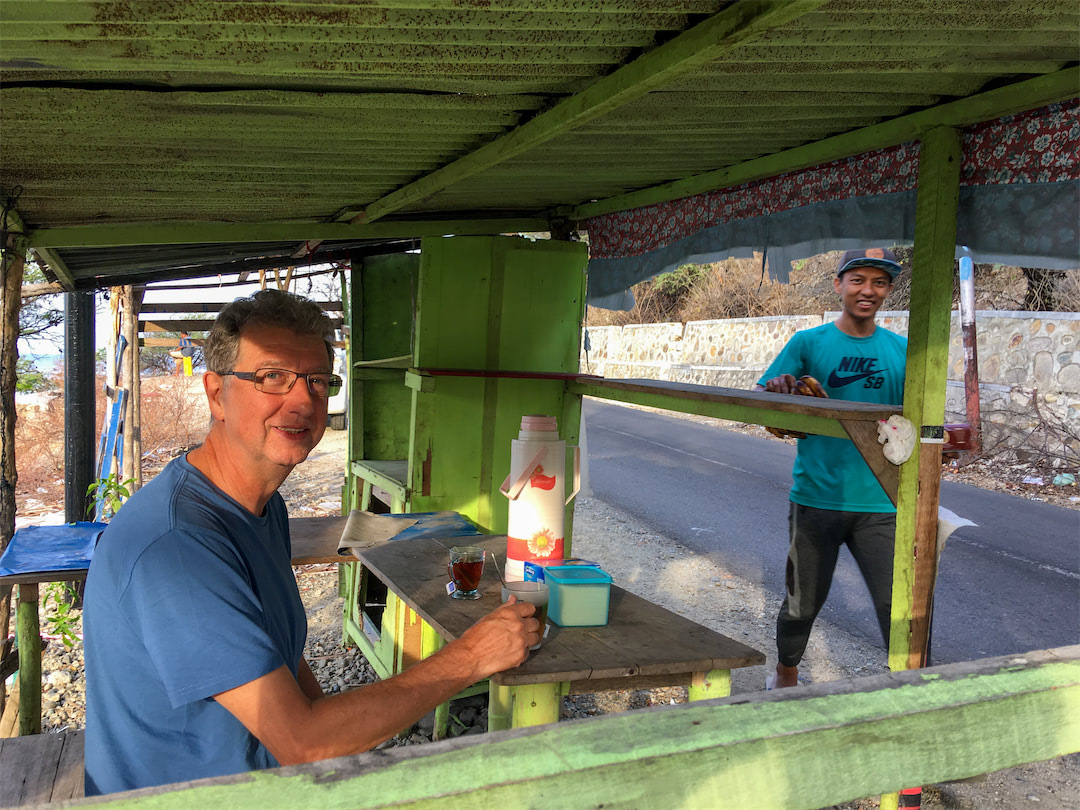 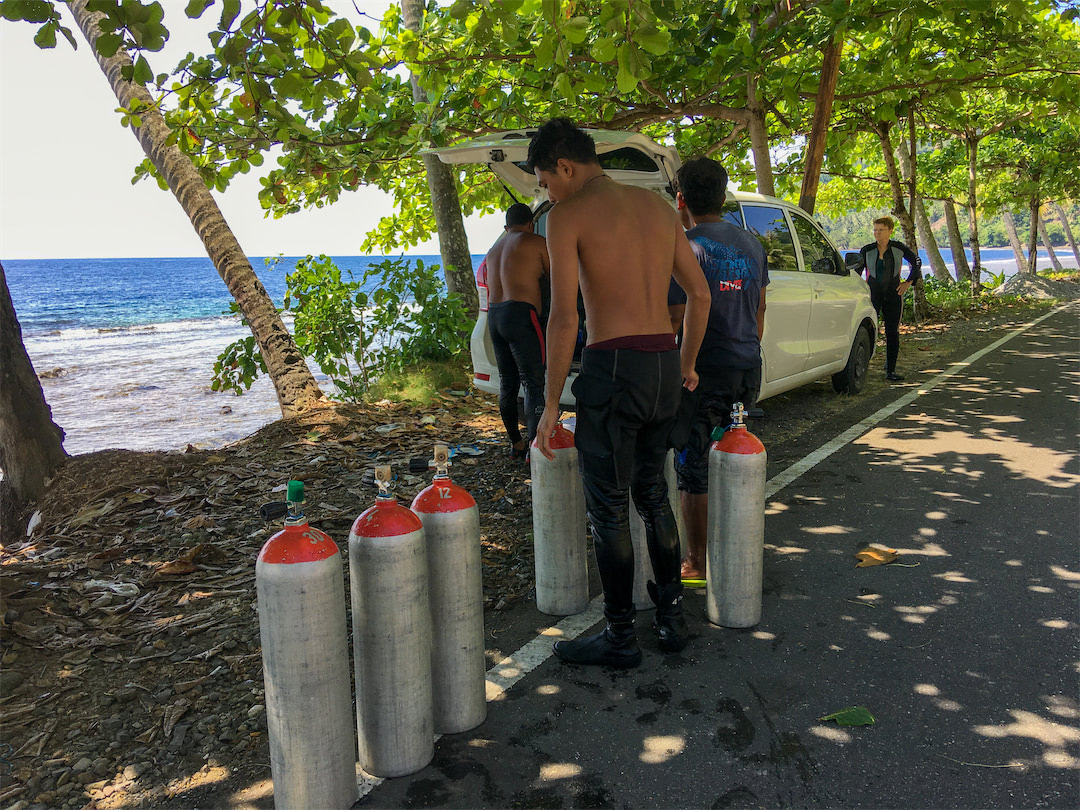 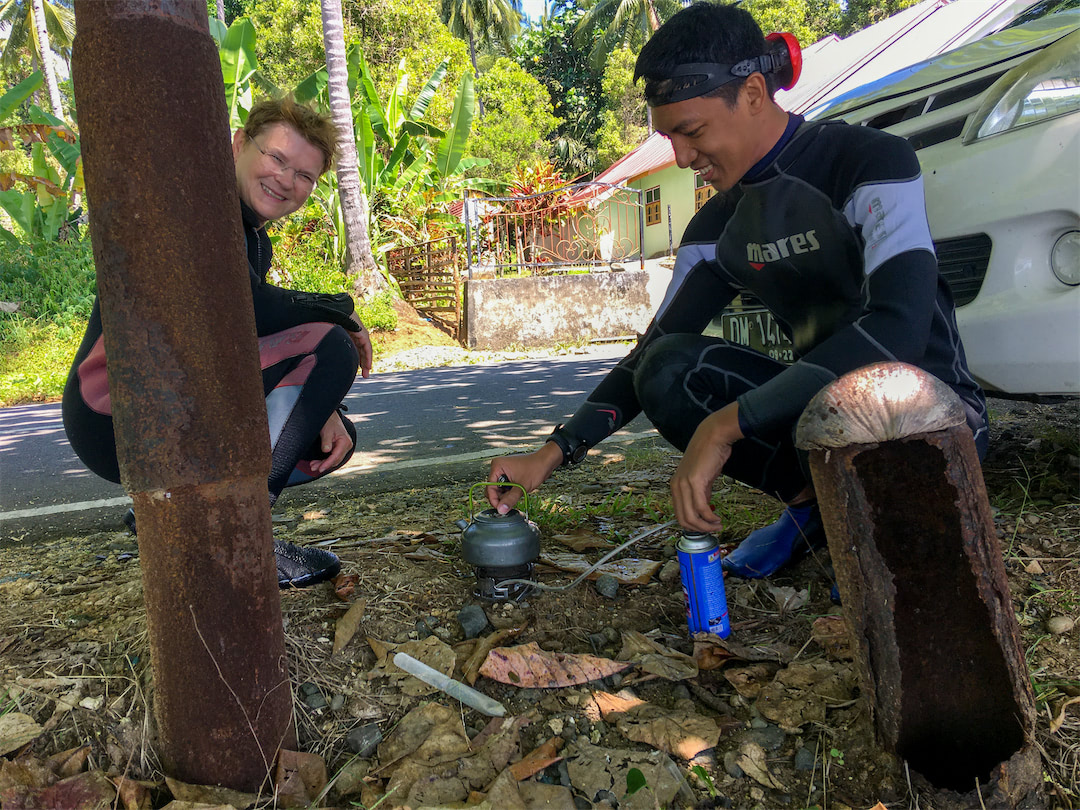 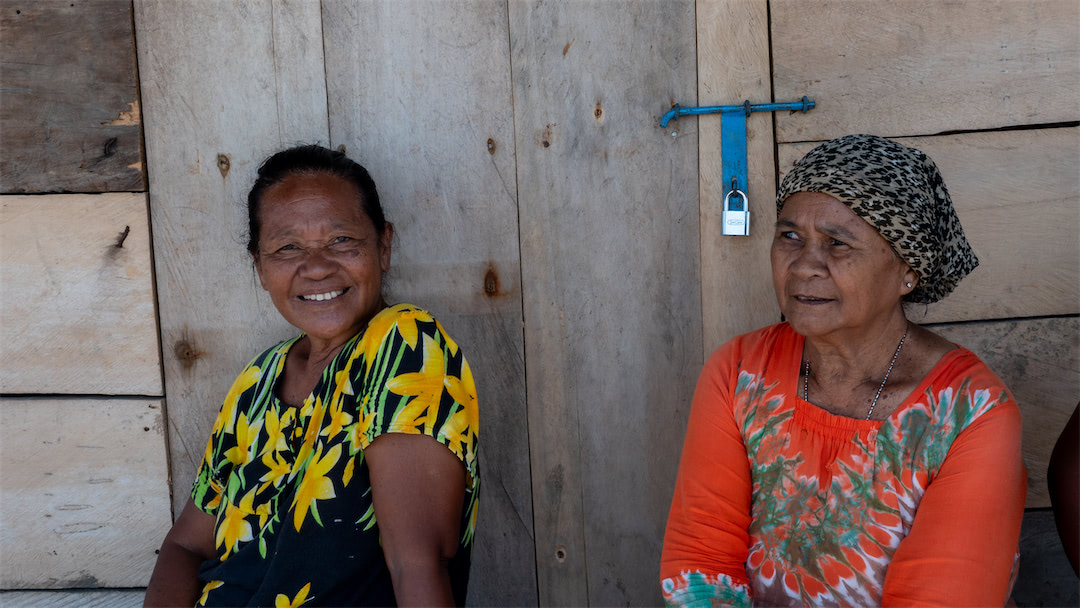 As a diving agent for Bolsel, I would first like to recommend Budi Satria from Gorontalo. Budi is a freelance dive guide who has already carried out diving tours to Bolsel several times with divers from the Indonesian diving scene. When he's not diving, he also organizes mountain bike tours in Sulawesi or climbs mountains in the Himalayas.

Indeed, Budi's choice turned out to be a good one. I have seldom experienced such a well and efficiently managed diving tour in Indonesia as with Budi and his team.

We reached most of the dive sites by diving boat, which anchored in a small harbor nearby during our stay. We drove to a few dive sites directly by car and got into the water from the shore. 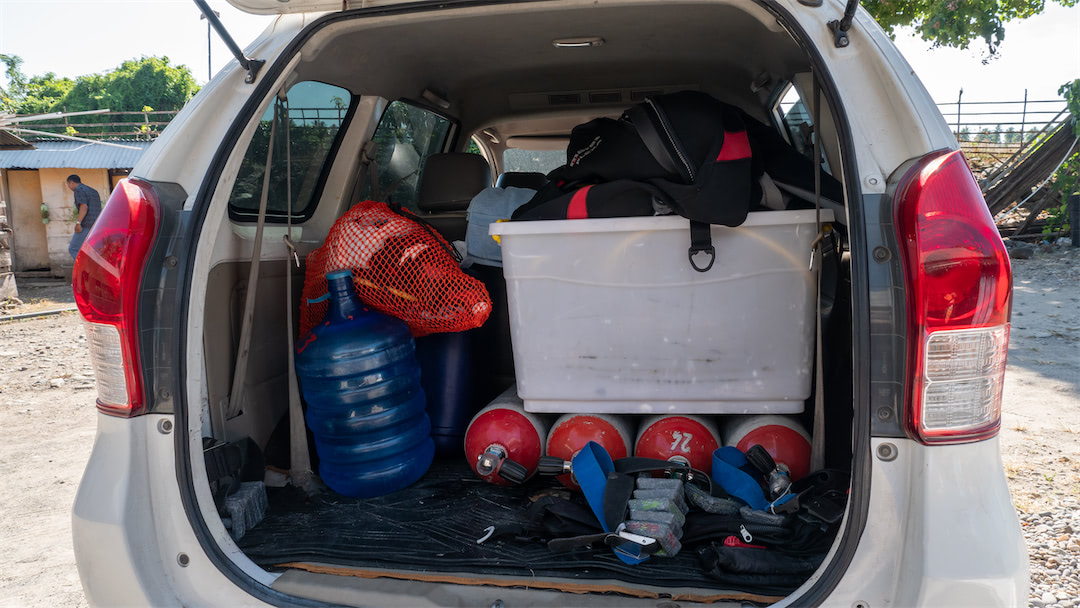 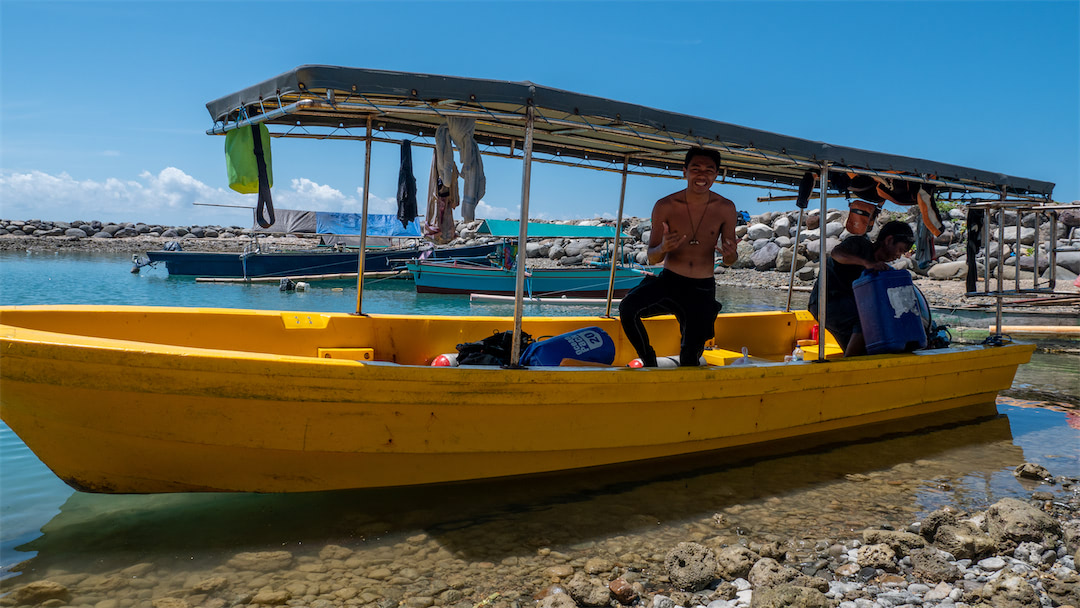 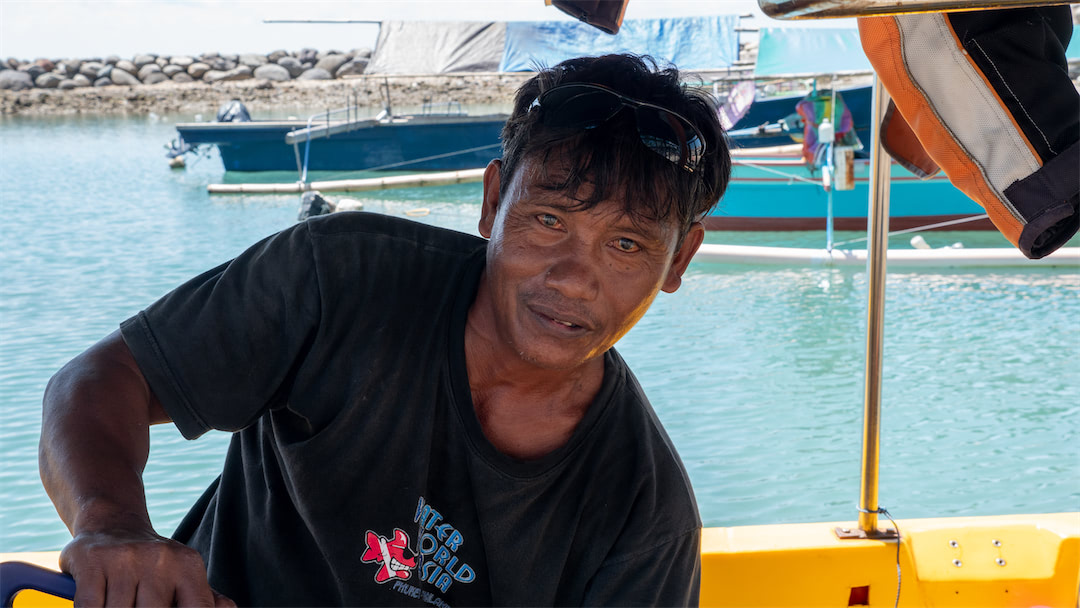 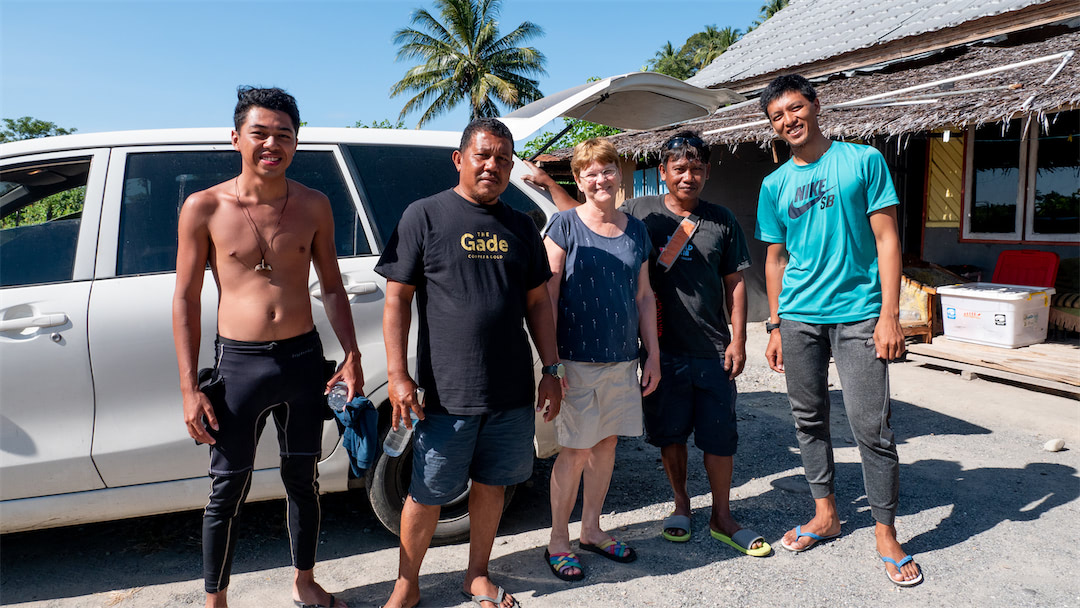 Since only a handful of divers have made their way to Bolsel so far, there is still a lot to discover here. During our visit we were mainly diving west of the Bogani Homestay.
These are steep walls, but also gently sloping underwater slopes, which mostly have healthy coral growth.

The Tomini Bay is in Bolsel very deep. Just a few kilometers off the coast the depth is already more than 2000 m. Cool deep water and currents from the Molucca Sea ensure that high water temperatures and the associated coral bleaching rarely occur in this region. While almost all hard corals have died further south in the shallow water around the Togian Islands, little of these problems can be felt off Bolsel. The underwater world is still okay in Bolsel.

During our dives, we often saw yellowfin and dog-tooth tuna, turtles, and the occasional blacktip and whitetip reef shark. In two places (Silver Tower and Barracuda Point) jacks and barracuda school above the reef.

For macro lovers there are also worthwhile motifs such as frogfish, pygmy seahorses and various nudibranchs. If you like it deep, similar to Gorontalo, you will also find the large Salvador Dali sponges at depths of 30 m.